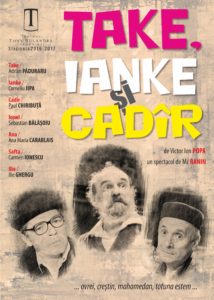 a show by Mc Ranin

Victor Ion Popa’s play, written in 1932, depicts the intercultural character of Moldavian townlets from that time. A story of three friends, Take, the decent and simple Romanian, Ianke, the sly and blabbed Jew and the gentle and wise Turk, Cadîr, presents the multiethnic and multicultural environment of the interwar period. Modest merchants, with a native intelligence and humanity, the three protagonists have a true friendship which doesn’t care about the religious and social barriers; they live in identical houses, share the food and never compete with each other. The peaceful passing of the days is shaked by the arrival of Ionel (Take’s son) and Ana (Ianke’s daughter), teenagers who study in Bucharest. Their intention to marry threatens to break their parents peace. Although they love their children, they refuse to become relatives, because Take is affraid of quarrels and Ianke is affraid of insolvency. The balance is restored by Cadîr, the silent friend who plans to please everyone and to put an end to the townlet gossips.

We take a Romanian, a Jew, a Turk and mix them together. It comes out a Turkish coffee made in Romanian sand, but kosher. If we add a drop of interwar cognac, we get a coffee with cream. So this is ”Take, Ianke and Cadîr”. A coffee as a champagne. Acidulated enough to give on the outside in roars of laughter and nodes of tears. Flavours from the past with contemporary character in which is very likely to  find yourself. Bravo!

It is a big pleasure for me to be on the stage with those extraordinary people. My role is as if you are watching for the first time, outside, on the window, trying to observe all the elements from the visual field: trees, roofs, sky, people, clouds, birds, high-voltage pillars. Everything must be included and essentialized … That is why I can not say more, because, as it is written in the text: “Long talk, man’s poverty!”

In a world where everything is sold and bought, some characters are struggling to demonstrate that love is above habits and traditions, obligations and personal needs. The stratagems and perfidy, doubled by some kind of cynism, which for some characters mean “parental love”, are melting in front of love. Ilie-Ițic, negative character, is indispensable to emphasize the value of some existences for which the love, under its various aspects, is the only faith. Honest, victorious. Just like the Christian Bible says “only in the deepest dark, light exists.”